I was really glad to be back in Thailand – land of smiles and cheap stuff! But the main reason was to meet a couple of friends from Singapore, and their two friends.

6.00am and I was already in Bangkok. They were due to touchdown at 2.35pm so I had too much time to kill. I already had a list of things I needed to do whilst waiting:

My sweet friends let me crash at their Airbnb apartment that they booked at Ratchadapisek Road area which thankfully had two MRT Train Stations nearby. Went down to Hua Lamphong MRT station and bought a ticket to Lat Phrao. Wanted to kill time at the railway station but only Black Canyon Coffee was open and it was really stuffy. Plus I needed to get a SIM card so I could contact my friends.

Took the MRT, alighted and got a li’l confused, needed to properly orientate myself. Thank goodness I had the app Maps.me to help me and there were a few malls nearby that I could kill time at!

So I walked, my 10kg backpack and I, mall after mall as none were open yet. 6++am and I walked past Big C, Union Mall, CentralPlaza. That was about 1km++, maybe 2? I felt really defeated cause nothing was open, I was sweating, time was running out, my back was tired.

& then a stroke of brilliance hit me, after reluctantly walking around, to search MCDONALDS on my map app and there was one nearby!!! Well, not really. I think it was about 700m away or so? Considered far for someone lugging a huge backpack. Should have done my reaserch earlier and stopped at the next station, Phahon Yothin!

Contacted my friend, washed up, took a good break, and killed time so that I could head to the mall when it opened and continue my to-do list: SIM card and exchange money.

Popped by a 7-11, managed to get the cheaper (199b) tourist SIM card by dtac, and continued onward to CentralPlaza.

Changed 50SGD temporarily cause I knew I could get better rates elsewhere. & then… I met Forever 21. Bought a top + bikini top for 1,150baht. There went the only baht I had.

Left the mall around 3.30pm for a slow walk to the airbnb apartment. Staked out at a nearby café to hide and wait for their arrival cause since I was crashing their apartment, I wasn’t supposed to be seen.

Staff at the café started making small talk with me. He thought I was Thai! Asked if we had any plans and I asked him to recommend places. He started talking about a temple and I stared at him saying, “We don’t want to go to any temples…” & we both laughed. Told him we intended to go to Chatuchak Market and we both laughed even louder cause that’s the most touristy place it can ever be. He was really nice though!

Plans changed again and the host was dropping my friends off at Chatuchak Market which meant… I had to make my own there, my backpack and I. Walked to the nearest MRT Station (it wasn’t very near) and train-ed to Chatuchak Park Station.

The worst thing that could happen is to lose contact with friends and of all places, at Chatuchak. Tried to give my friend a ring on the local number she had but it wouldn’t go through. DUM DUM.

Walked around with hopes of looking for her and her friends. I was starving and zoomed in straight on the drinks and food first. After walking the round for a while, I spotted Singaporean girls and was so relieved that it was my friends! It was like looking for needles in a hugeass haystack.

Long day of shopping ahead! Not for me though. I was controlling cause I didn’t need anymore unnecessary items, plus saving money. I was only willing to spend on transport and food.

We surprisingly spent only 2 – 3 hours there and moved on with the shopping itinerary. Shan’t go into much detail cause the stuff we did was pretty straightforward.

Woke up REALLY EARLY at 4.00am cause the lot wanted to go to the Pratunam Morning Market. Walked a bit, shopped (not me), had breakfast to kill time and changed money after. I was feeling so crippled and broke! Had to embarrassingly borrow money from my friend.

Headed to Platinum Fashion Mall after. While the girls shopped, I walked to Victory Monument to purchase a minivan ticket to Chat Pa Wai. I was going to head to a farm to volunteer after my friends left and wanted to buy a ticket to ensure my travel route. Walked ~1.2km and found the minivan station. Was a li’l lost cause I couldn’t find the exact travel company to go to. As per the host’s instructions to look for the last company with a half moon as their symbol.

Decided to walk a bit more and found it! Tried communicating in broken English to the staff but I somehow came to an understanding that they only sold tickets on the day itself. So they gave me a slip of paper with the minivan timings and I had to show up 15 minutes beforehand.

I was starving so I decided to grab my own lunch (pad thai, yum!) before meeting up with the girls again. I gave myself 1.5 hours to run my errand and I almost stuck to it! I was impressed with my time estimation. I overran by about 5 minutes. I didn’t include my lunch in it.

The girls continued shopping after lunch time and we finally moved on around 4.30pm to Siam Paragon/ Siam Center/ Siam Square. The things in Siam are pretty upclass and pricey so the only reason we went there was for food!

2 places we had in mind:

OH! But before that, we went to MBK Center cause I wanted to check out the SJCam. Met a German girl in Laos who recommended it to me and I was intrigued! It was a GoPro-wna-be.

Highly similar to the GoPro but way cheaper!!! I snagged it at 3,000baht. Think I could have gotten it cheaper but IT’S OKAY! You can view the quality of photos below! Most of it’s taken with the SJCam.

SO. Back to desserts. I didn’t have any After You dessert cause I pay them a visit almost everytime I’m in Bangkok; it’s like the must-go-to place.

But we shared a White Chocolate Cheesecake and the Crepe Cake. I liked the cheesecake more than the crepe cake. I thought the Thai Milk Tea flavor was interesting, really tasted like Thai Milk Tea! But I’ve never been a fan of Mille Crepe cakes. Maybe it’s the cream, or the texture. I just prefer a full-flavored rich cake.

Walked around a little and decided to head back to Union Mall cause the girls wanted to return there the next day to buy shoes. But since it was early and we had time, we made the most of it and cabbed there.

Good decision of doing that! I went to get my fringe cut cause it was too long while the girls did their stuff. Paid 100baht for a hair wash, cut, blowdry. I was really pleased with the service! I was afraid I had to pay more for the hair wash but it was included. Tempted to snip my hair short but I wouldn’t trust anywhere else but Singapore, plus I wanted to leave long hair. I kinda miss tying my hair up.

Last full day in Bangkok for the girls! We covered everywhere we wanted to go and was well ahead of the itinerary my friend planned. Decided to ditch going to Chocolateville cause it was not only far, but pricey, and apparently you only go there for the view.

Girls wanted to shop so we headed back to Platinum Mall around 12++pm. We finally had a very late lunch around 4++pm I think. I thought I was gna faint from hunger after so long. I had to stuff myself with fruits and sausages in between to survive.

Headed over to Khao San Road cause one of the locals suggested the place famous amongst backpackers, and I’ve been wanting to go so we went!

I was disappointed. I expected a huge night market with lots of food/ clothes but it was just one closed street filled with pubs, tattoo parlours, and other random stuff. Loads of pad thai food stalls lined the street; I had one but I didn’t fancy it.

Barely stayed for 15 minutes and I suggested heading to Talad Rod Fai Market behind Esplanade Mall, the one which the café staff recommended me to, and the girls were game. Was worried it wasn’t open on weekday nights cause some place online said they only function over the weekend but yay! They were open! 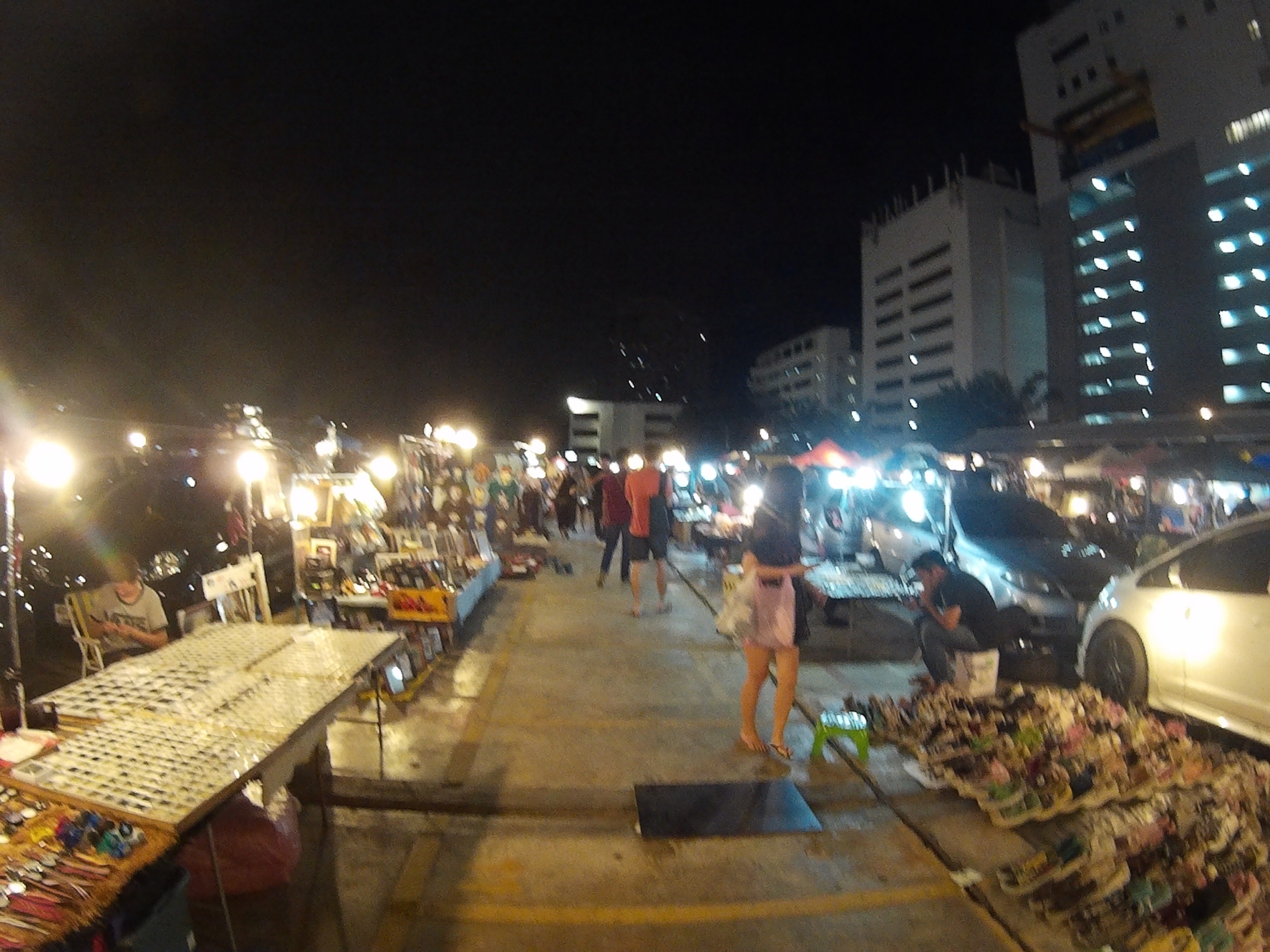 I love night markets; the food, and staring at lovely crap that people sell which I will never really need.

I was up at 4.30am and prepared to leave. The hosts were picking the girls up at 6.00am, I needed to leave stealthily and catch the 6.30am minivan to Chat Pa Wai.

Before I met the girls, I made plans to volunteer at a farm semi-near Bangkok for a week and I was on my way to the next chapter of my trip!

So that’s basically what I did in Bangkok, and typically do whenever I make short trips there (burn a hole in my pocket but not the calories)!

TL;DR: Met friends in Bangkok. They shopped, I ate. Spent loads on food, but free accomodation. Grew fat. Moved on to volunteer on a farm after they left.