I’ve found that the beauty of backpacking without any time restriction is being able to make decisions there and then and decide your next move without any advanced planning.

I had no intention to stay so long in Luang Prabang. I thought I’d stay three nights max, especially with me being uncomfortable with staying at the same guesthouse with the rest of the slowboaters cause I was so anti-social then. I didn’t wna really see them and be socially awkward. But I extended another two days cause I wasn’t ready to leave yet.

I stayed at Kounsavarn Guesthouse – 45,000kip/night for 8-bed mixed dorm. I love the fact that they provide free coffee and tea, and breakfast!!! I was so psyched over the tea cause I haven’t drank any teabag teas for almost a month. I missed it.

One big shock I got when I came into Laos was that everythig was so expensive! I didn’t know that the Singapore currency was so weak for Laos. The conversion is shit! I changed 1SGD for 5,520kip and subsequently changed for as low as 5,000kip. !@#%^

I went out with 12 other slowboaters for Lao-style-mookata buffet by the Mekong River! They had cooked food, uncooked food, and ice-creaaaaam!

The rest headed to a bar called Utopia and I decided to head back to the hostel cause I didn’t want to be even more awkward around them while they drank. I don’t drink; absolutely dislike it.

Went back, washed up, more dormmates came in. A British girl arrived at 10+pm at night and asked if I would like to join her for a cup of tea in the common area, which I did! So proud of myself for stepping out of the introvert-zone.

The rest of the slowboaters were going to Kuang Si Waterfall. I didn’t wna go cause I had no more clothes to wear and sent my dirty ones for laundry. It would take a day before I could get them nice and clean back!

Made friends, made plans with Alicia (British) and Ramona (German), and headed to Utopia to check out the yoga class and town afterwards to explore.

Walked along Nam Kong river and the two went to visit Wat Kien Thong*. I didn’t go in cause I’m not a fan of temples and I didn’t wna spend 20,000kip on entrance fee and 5,000kip for a rental piece of clothing to cover my shoulders. I’d rather spend it on food. Which I foolishly did while waiting for them.

We continued walking afterwards and found a local stall by the river which meant lunch time! Ordered a khao soy which was described as a beef bolognaise. It was different from Thailand’s but still good in it’s own way!

Went to the night market with Alicia around 6.30++pm and grabbed sandwiches. Checked out the night market which is pretty similar to Thailand’s. I’ve grown numb to all these bargain-markets. They all sell pretty crap which I don’t need/ will use at all. I am proud to say I am immune to all cuteness of the items.

But I finally spent some money for myself! Bought long traveller pants cause I needed something to wear tomorrow for yoga in case my laundry wasn’t ready.

Back to the hostel; left for Utopia with a bunch of English (rowdy, drunk) people. My laundry was done!!!

So the deal in Luang Prabang is that Utopia (a hip, cool drinking place/restaurant) closes at 11.30pm and everyone moves on to a bowling alley out of town to continue drinking and play drunk bowling.

I was expecting a dark bowling alley with cool neon lights but no, it was just a normal alley… Bummer. Played a game with the girls and pretty soon the crowd came in after 11.30pm.

More than halfway through the game, there were multiple blackouts and (drunk) people started to get heated up and got into arguments with the staff. Eventually everyone had a refund (20,000kip/person/game). I felt bad for the staff cause it wasn’t their fault that the power tripped. I think it tripped around the whole city.

Tuktuk-ed back to the hostel and reached around 1++am. I needed to get up bedore 5.15am to catch the alms-giving to the monks in the morning, yoga at 7.30am, and Kuang Si Waterfall after that!

Right before I managed to fall into deep sleep, these drunk boys came into the room and made a ruckus – pretending to bang each other and whatever weird-ass-stuff drunkards do.

So… whoopsies. Woke up at 8+am and felt bad that we blew off Mona. /: Really wanted to do yoga though; would have been a cool experience plus I needed the exercise.

Kuang Si Waterfalls time! It was about 40 minutes out of town.

I’ve seen quite a few waterfalls and honestly grown quite numb to it but this was really stunning! There were so many natural pools to swim in and the water was a stunning turqoisey-teal color. 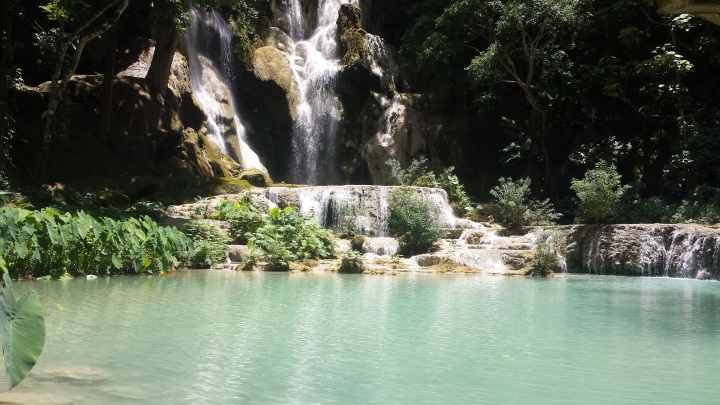 They have a bear sanctuary as well before you see the waterfall. It was pretty cool; with loads of bears inside.

Spent three hours there – one hour hiking up and down the waterfall to find nothing spectacular up there and back to the bottom to finally swim. I jumped from a tree and plunged into the waters. I was a li’l scared cause of my fear of heights but I did it! The fishes in the water were feasting on our legs too, like the ones in the fish spa. 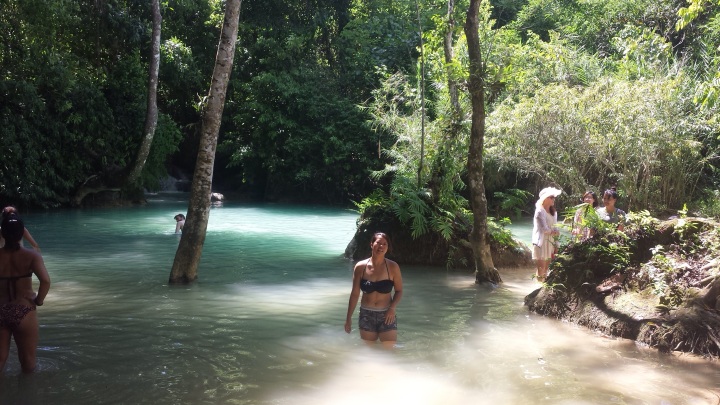 I finally understand why people take showers in the evening. If I were to go back out, I would save myself the trouble of showering and putting on clean clothes cause I was going to get dirty again. I’d only shower right before bed cause I want to feel clean before I sleep.

But the weather is so hot that people can’t stand feeling sticky. I finally get it out. But I didn’t shower after the waterfall hahaha I like being dirty. Kidding.

A few of us climbed up Phu Si Hill to catch the sunset. I was pretty sore that I had to pay 20,000kip entrance fee just to see the sun. Not sure why I did that. I wouldn’t recommend it to anyone unless you’re sure the sunset’s worth it. I’d rather eat a sandwich with that money.

It was a pretty chill night cause everyone was tired. We grabbed dinner (I had a yummy chicken) and I went back to the room earlier to rest.

Woke up around 5am and headed out to watch the monks with Alicia, Sam (English), Dale (English), Laura (English), and Annika (Netherlands… I think).

The monks all walk in one line around the town and villagers will place themselves along the street and give them food.

There was a little boy sitting along the street ‘begging’ for alms. It was heartwarming to see the monk-boys give the little boy crackers. It’s like passing on the goodwill.

Returned to the hostel; Sam, Alicia and I didn’t go back to bed. I didn’t feel like sleeping anyways. Once I was awake, I wanted to make the most of it. Surfed the net, attempted to blog a little until 7am – breakfast time!

Alicia (Liss) and I headed out to Utopia to chill out – zen by day, party by night. The view overlooked Mekong River and they had a lot of tatamis laid out for people to lay. Dale joined us after his nap and we went back to the night market area to have lunch.

OH I FOUND MY SLIPPER! HAHAHA. It was flung further behind the bush which we couldn’t see that night. Yay! Kinda happy it was found cause my slippers and I have gone a long way, literally.

Liss wanted to have the 15,000kip pile-as-much-as-you-can bowl for lunch but they were closed. Seems like they only open for dinner. Had sandwiches instead but I was so sick of constantly eating sandwiches! Trust me, I love bread but sometimes it’s a bit too much.

Had a mango cake instead and a Laos-style crepe for lunch.

Decided to head back to Utopia to chill and spent a couple more hours there. Left around 4+pm, left the hostel around 6+pm for bowl-of-goodness dinner!

Went back to the hostel after a round at the night market and hung around the lobby just chatting and chilling. It felt really nice and I felt more connected to the others. Sadly, Liss and I were leaving for Vang Vieng the next day.

Pick-up to the bus terminal was at 8.30am and we said our goodbyes. We bought tickets for a VIP bus which would take seven hours (115,000kip) but ended up in a mini-van which would take five hours (125,000kip). Sweeeeet!

The van was full –

Made friends with them, played Heads Up!, journey took seven hours instead cause of the road conditions. the Norweigians and us stayed at Pan’s Place while the rest was just next door. The rest of the slowboaters were there as well. It’s a pretty popular place to stay at and rooms are cheap.

I expected to do more and see more things in Luang Prabang. It seemed like the only popular things to do was Kuang Si Waterfall, Wat Kien Thong, night market, swimming pool, Utopia, Bowling Alley, blah.

I liked Luang Prabang though, which explains why I stayed so many nights, despite things being pricey for me. I hate that fact! (!!!) Southeast Asia is supposed to be cheap, except Singapore.

The first thing Laos reminded me of was Malaysia/ Batam cause of the roads and kampungs. It’s a different experience, I must say.

yesterday's beauty - living amongst the upper class. (also secretly hoped to be quarantined so i wouldn't have to come home) #dubai
sunset + @atlantisthepalm = 💯 #dubai
i'm in middle east but all i want to eat are the western food chains such as The Cheesecake Factory, Shake Shack, ihop, Five Guys, Chuck E Cheese, Papa John's, Denny's, etc. but the first day i freaking ate Marrybrown's cause the staff at Papa John's was unresponsive and i had no choice but to eat fried chicken. #dubai
visited Sharjah, one of the seven kingdoms of UAE today. felt like i was in a mix of cambodia + mongolia. #sharjah